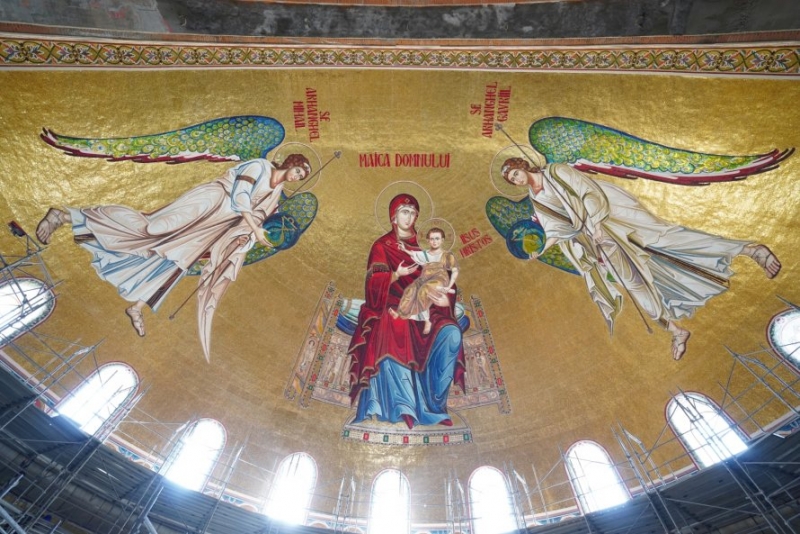 The People’s Salvation Cathedral (Romanian: Catedrala Mântuirii Neamului), also known as the National Cathedral, an Orthodox cathedral under construction in Bucharest, Romania, to serve as the patriarchal cathedral of the Romanian Orthodox Church, has a giant Orthodox iconostasis (23.8 meters length and 17.1 meters height and an area of 407 square meters), which sets the new world record for the Largest Orthodox Iconostasis, according to the WORLD RECORD ACADEMY reports WORLD RECORD ACADEMY.

The iconostasis will be covered with mosaic on both sides, having over 800 square meters of mosaics.

In Eastern Christianity, an iconostasis (plural: iconostases) is a wall of icons and religious paintings, separating the nave from the sanctuary in a church.

The cathedral is dedicated to the Ascension of Christ, which in Romania is celebrated as the Heroes’ Day, and to Saint Andrew the Apostle, protector of Romania.The Cathedral was consecrated on 25 November 2018 by the Ecumenical Patriarch of Constantinople Bartholomew I, Patriarch Daniel of Romania and Metropolitan Chrysostomos (gr) of Patras from the Greek Orthodox Church.

When completed, the cathedral will also have the largest mosaic collection (interior decoration) in the world (~25,000 square meters).

The cathedral’s prestige is made even more unique by the mosaics that decorate the iconography of the dome as well as the iconostasis; realized by artist and mosaicist Daniel Codrescu and his team with Orsoni Venezia 1888 enamels and golds.

For the realization of the iconostasis of the cathedral in Bucharest, a team of over 45 mosaic and fresco specialists worked for 10 months. The leader of this team was iconographer Daniel Codrescu.

The World’s Largest Orthodox Iconostasis is made entirely of mosaic and fresco in Byzantine style. Iconostasis has 45 icons placed on four registers.

Iconographer Daniel Codrescu said: „Everything is worked in the smallest details. This iconostasis is the summary of the kingdom of heavens.”

After almost a decade of construction, the cathedral was consecrated on 25 November 2018.

The consecration was held in the presence of 100 priests, including 60 bishops. Special guests were the Ecumenical Patriarch of Constantinople Bartholomew I and Metropolitan Chrysostomos of Patras. Approximately 55,000 people attended at the Divine Liturgy which took place inside the cathedral just after its consecration

Patriarch Daniel said about the first celebration: „The homage to the memory of the Romanian heroes during World War I, who fought for national freedom, unity and dignity, must be today a source of inspiration and renewal for patriotic Romanians. That is why, the main dedication of the People’s Salvation Cathedral is the Lord’s Ascension when we celebrate the Day of Heroes. Thus, besides the practical necessity of the future National Cathedral, this is also a national spiritual symbol, being dedicated to the worship of those who have sacrificed themselves for the defense of the homeland and the Orthodox ancestral faith and for the freedom of the Romanian people.”

Patriarch Daniel said about the second celebration: „This building will be a symbol of national unity because the feast of Saint Apostle Andrew, which was placed the day before the National Day on 1 December, shows that the national unity has settled with us on the Romanians primarily on spiritual unity, on unity of faith, thought and sentiment. Our church greatly contributed to the development Romanian language and Romanian culture.”

On 31 May 2019, Pope Francis arrived in Romania, visiting the cathedral the same day.

Pope Francis expressed the hope that „Romania can always be a home of all, a place of meeting, a garden in which reconciliation and communion flourish.”

The pope emphasized brotherhood and communion among all who prayed to the same Heavenly Father. He said: „Each time we pray, we ask that our trespasses, our debts, be forgiven. This takes courage, for it means that we must forgive the trespasses of others, the debts that others have incurred in our regard. We need to find the strength to forgive our brother or sister from the heart (Mt 18:35), even as you, Father, forgive our trespasses: to leave the past behind us and, together, to embrace the present. Help us, Father, not to yield to fear, not to see openness as a threat, to find the strength to forgive each other and move on, and the courage not to settle for a quiet life but to keep seeking, with transparency and sincerity, the face of our brothers and sisters… I come as a pilgrim desirous of seeing the Lord’s Face in the faces of my Brothers.”