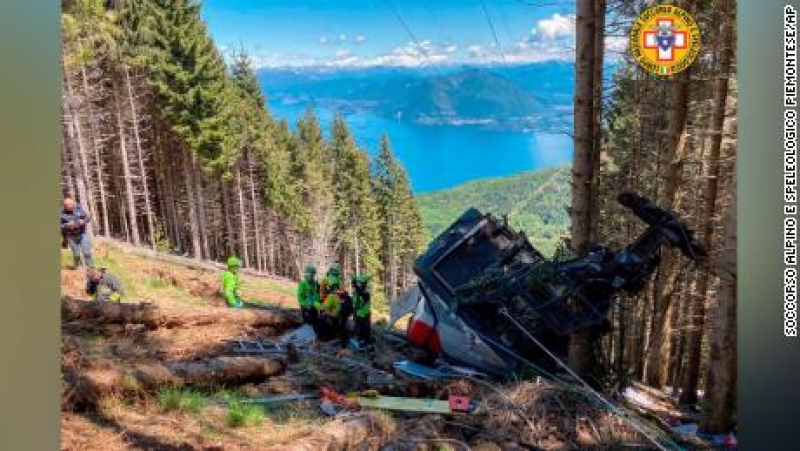 The Ministry of Foreign Affairs (MAE) informs that there seem to be no Romanian citizens among the victims of the cable car accident in the Italian resort Stresa, the Piemon region, as the Romanian consular office hasn’t received any notifications in this respect from the local authoriteis, while the Consulate General in Turin hasn’t received any request for assistance yet, agerpres reports.

The Ministry, through the Consulate General of Romania in Turin, acted on its own initiative after seeing the information in the mass media in Romania regarding the incident that took place on May 23, in the Stresa resort, Piemont region, and immediately got in touch with the local authorities to get information related to the identity of the persons involved, specified MAE.
According to this source, until now, the local authorities haven’t notified the consular office in relation to Romanian citizens being among victims, and also no requests for consular assistance were recorded related to this accident.

According to the preliminary data obtained by the representatives of the Consulate General of Romania in Turin from the local authorities, there have been 10 out of 13 victims identified until now, with no Romanian citizen being among them.

The Consulate General of Romania in Turin monitors the situation with priority and keeps in touch with the local authorities, and it is ready to grant consular assistance if needed.

Moreover, the Romanian citizens facing a difficult, special, emergent situation can also call the emergency number of the diplomatic mission: +39 338 756 8134.

Thirteen persons died and two others were seriously wounded after a cable car in the Stresa resort located in the Italian region of Piemont, on the shore of the Maggiore Lake, fell, according to a new report of the rescue teams, informs the AFP.